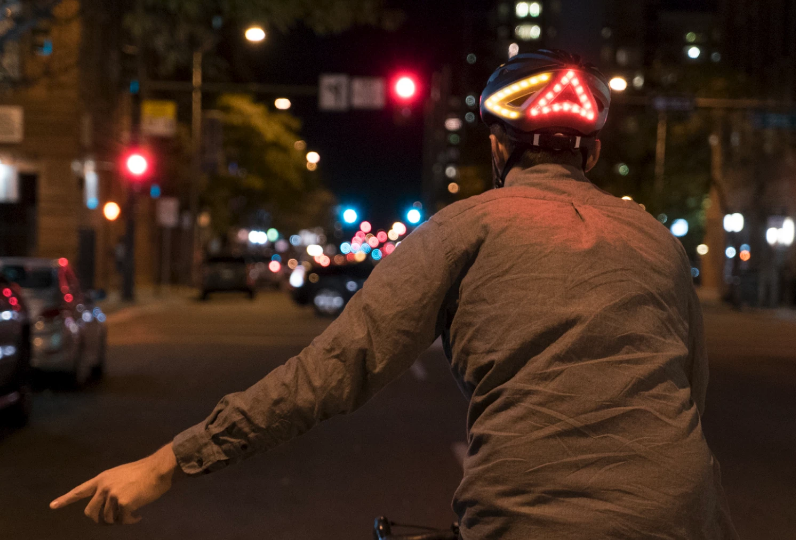 Bike commuters do a lot to make drivers notice them.

They slap reflectors on their clothes, install lights on their bikes, and put on neon yellow vests. Now they can use turn signals like a car.

Apple started selling Lumos Matrix helmets in its stores and online Wednesday. They come in two colors — white and black — and retail for $249.95.

In addition to a bright front light, the helmet has a 7×11 dot-matrix, animated LED panel on its rear to signal turns and brakes to drivers — an upgrade from the static display of Lumo’s previous helmets. It also has a new sleek, streamlined design.

Bikers can activate the lights with a simple touchpad that can be attached to their bike handlebars or an Apple Watch app that automatically detects hand signals. A mobile app allows users to adjust the lights’ brightness and flash frequency; it even offers users a new option to customize the animation displayed on the rear panel.

Overall, there were more than 800,000 daily bike commuters and more than 84 million trips taken on shared bikes and scooters last year in the U.S. alone, according to the U.S. Census Bureau and the National Association of City Transportation Officials.

At the heart of the Lumos Matrix, Ding says, is the vision of a helmet that anticipates the needs of our contemporary urban landscape.

“Helmets have been around for a very long time, but they haven’t really changed fundamentally in 20, 30 years,” Ding says. “We want to come up with ideas that embody the next-generation helmet. The helmet has done a great job of being a form of protection; we’re trying to add to that by saying it’s not just protection but also prevention.”